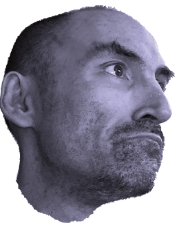 DJ Palsy P (pronounced like this) is a disabled DJ who started in 2006 after stumbling upon the famous software Virtual DJ. He uses his nose to type on the keyboard and uses his left foot to operate a trackball, he didn't think he would be able to use Virtual DJ because of this, however, being a guy who - throughout his life - doesn't let obstacles get in his way, he found a way to accomplish the dream. He is also unable to speak, to communicate to his audiences, he uses a text-to-speech program called Natural Reader, which uses a synthesised voice. Another program he has just started to use is VoiceMod (yes, a bit ironic), it has a soundboard feature, he just uses it for the soundboard so he can make MP3's from his "robot" voice program for his streams. Pairing it with StreamDeck (mobile) is a game-changer for him.
News

Due to the closing of his Mixcloud, you can now listen to all his sets on here, just go here.

DJ Palsy P has opened a Patreon with four tiers - there is an entry tier of £1.50 (+VAT) a month. When you choose this tier, you're just supporting what he does. Starting the donation threshold low means that, hopefully, everyone should be able to support his work. Other tiers have the opportunity for you to get your name on his streams and Youtube videos, plus you can even request genres for DJ Palsy P's sets!

DJ Palsy P is a Drum & Bass, House, Fidget, Makina, Bounce/Donk and UK Garage DJ from the UK. When he was 3 years old, he was diagnosed with Cerebral Palsy after his parents were concerned he was not sitting properly, was not trying to talk, or trying to walk. Growing up with a disability can be a challenging experience. He has proven that this isn't the case, he has achieved so much in his life, whether it is for himself or for his family.

In 2006 he begun his deejaying career, although he never thought that he could become a DJ, it took encouragement and hard work, but it took only one person to change all that, a humble guy called Jonathan, also known as ellaskins and the DJ Tutor. DJ Palsy P was one of his very first subscribers, even remembers his very first videos. Jonathan commented one one of DJ Palsy P's first ever mixes, and that very comment encouraged DJ Palsy P to continue to become "A Superstar DJ" (quoted from Jonathan) - and we can truly say that this has become true. DJ Palsy P met Jonathan at the BPM in 2008 and then again in 2009, which was long overdue.

As DJ Palsy P has a physical disability, he finds it hard to use his hands well, but, he can use his nose, this meant that to be a DJ he needed something that would help him achieve this. Searching the world wide web, he came across this site called Virtual DJ. He downloaded a trial version of the program and began practising. After a while, and countless amount of keyboard shortcuts defining within Virtual DJ, he began to improve. He has a Youtube channel, and thought that he would make a few mixes and upload them for some response. He had mostly good responses, so that encouraged him to continue his dream to continue to be a DJ. Not so long after, he decided to make a video to show people how he deejays, and to date, this video is DJ Palsy P's most viewed.

DJ Palsy P has inspired a lot of people over the years, this has showed many people that having a disability is not a obstacle, if these people have the determination and dedication to do what they desire to do, they can find a way to accomplish their dreams.

His greatest achievement to date - apart from passing his driving test - is designing and running his own internet radio station all by himself, Live4Vibez (R.I.P). To fit his style of deejaying, all the live shows he does are called "The Crazy Crossfader Show".

He would love to work as a mobile DJ, at parties, clubs, radio stations or internet radio, also to attend events and speeches. Give him an email!

He has bought a Traktor Kontrol S3 controller thanks to donations.

Frequently Asked Questions
Here are the questions Palsy P gets asked. If you wish to ask him a question, feel fee to join his Discord Server.
Palsy P has Cerebral Palsy which has affected him to be able to speak and move his limbs properly. The reason was a lack of oxygen when he was born. To put it bluntly, Palsy P was actually dead for around 10 minutes and when he was revived, he was only given twenty-four hours to live.
It is a physical disability, it is a group of disorders that affect a person's ability to move and maintain balance and posture. CP is the most common motor disability in childhood.
Cerebral means having to do with the brain.
Palsy means weakness or problems with using the muscles.
There are misunderstandings that it is a mental disability - it is not.
Some people even ask if Palsy P is really disabled - his answer to that is, yes, he is.
No, why would anyone do that on a LIVE stream?
Palsy P is around 50, born in the early 70s.
Chutney (17/M), Angel Delight (11/F) and Mango (4/F). He used to have 2 others, Pickles (reached 18/F) and Sox (reached 5/M). See them all here.
Yes, and not really looking. Palsy P is somewhat socially challenged, he is not that comfortable around women, or people full-stop really! However, if he meets someone who will take him for who he is, he wouldn't say no.
Started in 2006.
Virtual DJ
Yes, Palsy P does all his own graphics and OBS set up. He is competent with Photoshop.
Stream Schedule
This is currently Palsy P's permanent set out times, which could change or be added to. He could do extra sets at other times too. Join his Discord server to be alerted whenever he goes live on Twitch.

Times are UK times in GMT